Life is giving YOU signs…. If you listen carefully – they can lead you to your destination.

Begin a Meaningful Career, or Accelerate and Enlighten Your Current Business, with the #1 Spiritual Life Coach Certification and Sacred Online Business Academy 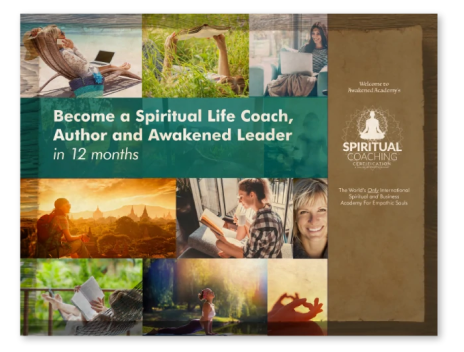 One minute. I’m just holding the vision and it’s all good. Next thing I know, I’ve got 10 days to get on a plane, to go halfway around the world and start a new life. This is the missing step in manifestation. Would you love to manifest more powerfully, more easily, manifesting all the beautiful things that you want in your.

I’m Michael McIntosh, and in this session we’re gonna talk about something that a lot of people really do not think about. And when I first started practicing these things myself, I didn’t do this thing I’m about to share with you, and that’s why. I was frustrated and nothing happened. Once I started practicing this one thing, then I started attracting wealth and success, and I moved from England to Hawaii and was living in a beautiful tropical island, created millions of dollars and all sorts of magical things have happened, but they wouldn’t have happened if I hadn’t done this one thing.

It is done. So a quick recap in the manifestation journey. We need to know what we want, but it’s true and pure in our heart. We need to feel that we’ve truly attained everything We need to really go for it. Really go for it, and not just dabble in this, but go deep and feel it fully with sincerity every day.

And this step is that as you are feeling that you’ve attained everything, what will happen inevitably is that your subconscious mind will deliver to you, to your conscious mind

ideas. You’re gonna get ideas in your mind all of a sudden. From out nowhere. You’re saying, I should do this, I should do that. What about this? I should see this person. Or you might notice some strange numbers. They see these numbers again and again, where you might pick up a piece of paper or newspaper or go on the internet or look at a sign somewhere and go, Whoa, I’ve gotta do that.

Or someone calls you up and they say, You’ve gotta take, do this thing. Something’s gonna happen. Sooner or later, guaranteed, something’s gonna come to your attention about what you can do to move in that direction in a practical way.

And what a lot of people do is they just say, I’m just gonna sit here and I’m just gonna feel that I’ve attained everything and not worry about. Doing anything

but these ideas, these signs are coming for a reason, and when they do, we need to pay attention that this is a sign. This isn’t just random thing, this is here for a reason, and then we need to take action. We need to actually do the think. There are these moments of action, these tiny little magic moments where you have an opportu.

And if you don’t jump on it right then and there, then off time it just disappears. For example, I was in England, I think it was 2007, and I was feeling terrible. I had a major breakdown in my life, and I’m not gonna get into the details, but I was feeling awful. Finally, I discovered to stop messing around with this law of attraction stuff and do it properly, so I really went for.

And was feeling that I’ve attained everything every day, and I had this vision board of being in this tropical place somewhere, doing meaningful work, doing what I love, having wealth and freedom and being with beautiful people. It is done. It is done. It is done. And I did that every day. And I started feeling really good in my heart.

Felt this hope and this joy in my being. And then one. My friend out of the blue sent me an email saying, Would you like to come to Hawaii? I’ll pay for your ticket. And I couldn’t believe it. This is out of the blue. I didn’t expect anything I could have said, Oh, isn’t that wonderful? It’s just, But I took action.

I replied to the email and I said, Yes, of course, next day I got another email back with a ticket that he’d bought for me leaving to. In 10 days from that date, right? So one minute I’m just holding the vision and it’s all good. Next thing I know, I’ve got 10 days to get on a plane, to go halfway around the world, and start a new life.

So I had to say yes. I had to pack my bags, I had to get everything in order, get on the bus, go down to the airport and get on the plane. If I hadn’t have done that, then I’d still be in England now instead, because I took action, I was actually living the experience in a real way.

There are these little things. Sometimes it’s not as extreme as that. Sometimes it’s just send an email, talk to so and buy a course. There’s all sorts of things, but when those things come to your mind, make sure you do something about it. Take the action. It’s simple thing. It’s just taking that next step.

So what is life telling you? What are the signs in life? Listen carefully. Life is trying to help.

So have fun. Thank you for your beautiful presence. Wishing you all success in manifesting your purest and highest and most divine desires that are gonna bring you so much joy. May all good things come to you.

I look forward to connecting with you in the next session where we’re gonna go even deeper into some of these things that many people ignore. And that’s why it doesn’t work for them. But once then everything gets easier, faster, and so much more magical. . Talk to you soon and lots of love