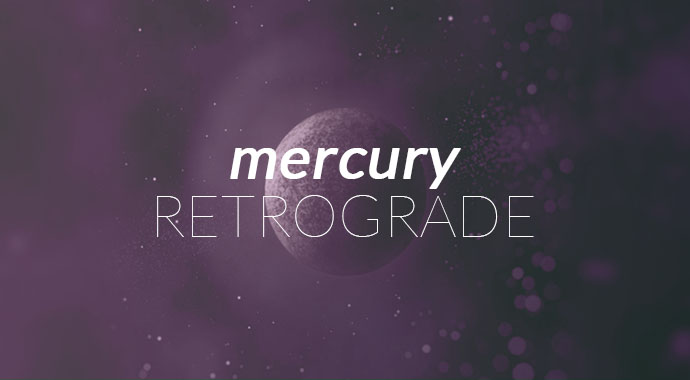 If you already know about Mercury Retrograde, you know it can be a frustrating time of year where all your communication seems to go awry and none of your plans seems to quite work out right. It’s just when things start falling apart when you decided to check – and YES, it IS Mercury Retrograde again!

The good news it that if we embrace this time, then we can use it as a powerful opportunity for growth, tidying up old messes and re-assessing what’s really important –  and what’s not so we can move forward with newfound clarity and power.

But if we ignore this time – we’re probably going to have a frustrating few weeks!

I never used to believe in Mercury Retrograde until I finally discovered that during these times the same communication issues would arise over and over again. After a while I got the message and now instead of fighting against it – I embrace Mercury Retrograde to support me in my life.

What is Mercury Retrograde?

Mercury, being the planet closest to the Sun has an orbit that’s much shorter than Earth’s – speeding past our planet three to four times in each year.

When Mercury is retrograde, the other planets in our solar system seem to be travelling backward through the zodiac. This actually an illusion. To understand it, imagine driving down the highway near a train track seeing a train high speed train whooshes past you. Now imagine being in the train looking back at the car on the road. If you were in the train it would appear the car was moving or receding backward – but this is an optical illusion just like mercury retrograde.

Most of us have done things that are unresolved and messy. Now’s the time to tidy them up and fix them.

This means tidying up our relationships, work, business, finances and of course, our homes.

What patterns and themes keep coming up over and over again for you to look at?

Mercury Retrograde is the perfect time to slow down and face yourself and your life.

For the next few weeks take the time to go back and have a good look at various themes that are coming up once again for review.  This could be relationship, money, health or career issues. What is most pressing for you?

We know that we’ve been here before, but like a cycle something’s different about it this time. What is your life trying to tell you? It may be your career is leading you to a different direction, a new business endeavor, an opportunity to travel, finding another house, switching who you spend your money with and buying new things or changing your relationships.

Whatever it is, your past is coming back into your awareness, but in a different way for you to review. Instead of reacting and making hasty decisions, this time we have to slow down and take our time to discuss things within ourselves and other people before making any decisions or changes.

Back up your stuff!

Mercury Retrograde is probably most renowned for creating havoc with communications technology. Now’s a good time to back up your computer, phone and anything else you need. I remember someone told me to do this once mercury retrograde – but I ignored them and the next day my harddrive crashed. Another retrograde my debit cards stopped working, and of course the cell phone has had it’s fair share of weirdness during this time. So back stuff up and relax.

Mercury Retrograde  is a time of reflection, not a time for decisions and launching projects.

That’s why during this time we are advised to avoid making long term commitments, starting new projects, signing contracts and jumping into things without really thinking them through (and waiting until mercury retrograde is over).

If things can wait after the retrograde, then put them off. Take this time to review, discuss and plan more and avoid doing something that may change the course of your life.

If a decision has to be made during the retrograde, have a Plan B ready if anything comes up after the retrograde or even much later.

An exception to the above is if it involves someone from your past: for example it’s not advised to jump into a new relationship during a retrograde, but if it is with someone who re-enters your life, it could prove to be promising.  Likewise, signing a contract to start a new job is not ideal, however if you had a previous relationship with your new employer in some capacity before, this is perfectly acceptable.

Just keep in mind, agreements made during a retrograde likely will need to be renegotiated down the road. Stay open to that possibility and it will prevent you from being disappointed if it happens.

So what can you do?

Here’s the things that can be useful.

Open the door to the past to reconnect with people who you have unresolved stuff with and have those hard conversations and heal old wounds. It’s time to connect and communicate.

Correct past mistakes and come to terms with things that didn’t work out. Maybe you have a job application that was rejected, a house that you didn’t get, a relationship that went sour. If there’s is nothing you can do – then just finally close the lid and say goodbye. Truly let it go. If you can make things better – then make them better.

Make the most of what the Mercury Retrograde may bring to you. You may have to postpone a plan for something better. Observe, see what happens and learn. Then ask yourself:  if there’s no more tomorrow, what would you be doing differently today?

Tidy up and purify your home!

This is a big one. The space you live in is a result of your past actions. All the stuff you have is from the past. Some of it is relevant now and in the future – but a lot of our stuff is just dead energy that’s keeping us trapped in the past. If you really want to evolve yourself and shift into a new level of being – then do a house clearing.

Below is a special audio, extracted from one of our programs for you that will help you upgrade your home and make some remarkable upgrades to your life.

Creating a Sanctuary - Making Your Home Into a Heaven